‘Street Football,’ Neighboring and the Importance of Origin Stories 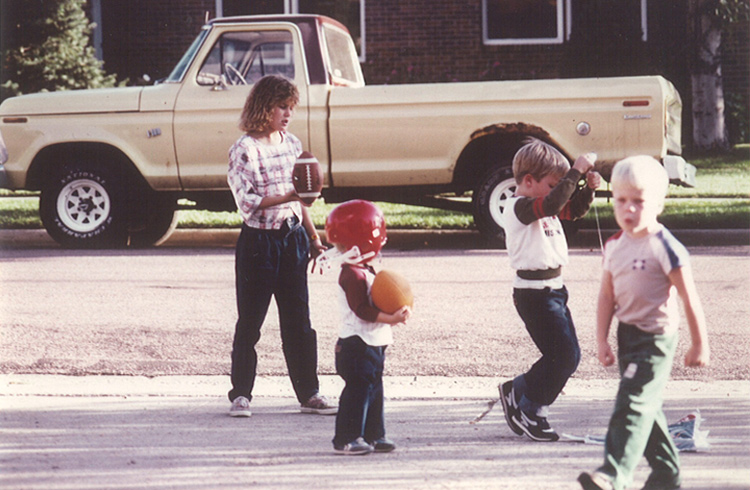 For most of us, we began dabbling in the art of neighboring long before it became a book and city-wide sermon series that simply and soberingly presented us with a counter-cultural way to live. Before we were adult neighbors, we were kid neighbors. Our experiences when we were young can profoundly shape the way we approach our neighbors and our “theology of place” now — for good or for ill.

It also likely that as you have aged, your perspective on your neighborhood — and how you and your family neighbored — has changed. You see the subtle dysfunction that your innocent eyes didn’t recognize. You identify isolation and misunderstanding where you once chalked it up to simple unfriendliness. You see the power of relationships formed from proximity that you might not have realized at the time. We’re humans — image bearers of God born broken and corrupt. Nothing is ever simple. Mayberry is a false narrative.

Regardless of how painful or pleasant it may be for you to recall your childhood neighborhood, I believe there is great gain to be had here. If the deluge of superhero movies has taught us anything, it’s that origin stories matter. Acts 17:26-27 was just as true when you were 11-years-old as it is today. God has been writing your story the entire time.

I wrote the following poem several years ago, and as our series on neighboring has progressed, I thought I would share it. It’s more reflection than “lesson learning,” but that’s where we have to start. There are things about my past and about the life on our street that I never saw until I wrote about the (suddenly and remarkably) clear shapes in the distance.

We used to play football in the street in front of our house.
The crabapple tree near the corner of our yard
at the intersection of Spruce and 11th marked the goal line for one end zone
and the row of mailboxes in the Corvis’s yard marked the other one.
They were an elderly couple one house down on the other side of the street
who had lived there before my family moved into the neighborhood.
Dad made us help shovel their driveway in the winter.
My brothers and I delivered the Yankton Press & Dakotan to them,
and they would leave us a tip or some chocolates at Christmas.
I remember going inside their place only once
and that was with Dad to see what their finished add-on looked like.

Teams were made of myself, my three brothers and the neighbor kids.
Kahlab, who lived next door with his parents and two younger sisters,
played more often than the others.
He was like a fourth brother and it was always a little sad when
his mom would call for him to come home — sometimes for dinner,
sometimes to do homework, sometimes because she just wanted him home.
If he didn’t listen right away, his sisters would come get him
in the middle of a game, ruining the rest of our afternoon.
He always told his sisters that he didn’t want to go home;
then his mom would appear on their front step
telling him it certainly was time for him to come home.
Our families were great neighbors for each other; we just didn’t think
Kahlab was given enough time for his friends or football.

There’s no way to know how many games were played
between that crabapple tree and the mailbox.
Our stadium was that narrow, Midwest street, echoing
with the late-afternoon exuberance of childhood’s free time
and the rising and falling of the cicadas’ applause.
Sometimes the street rang with cries of injustice when the ball carrier
felt there was no possible way he was tackled with the required two-hand touch.
Frantic shouts of “Car!” would break the flow of the game
as we jumped onto the nearest curb or lawn to let
the automobile intermission pass through harmlessly.

I’m sure the neighbors grew weary of the pre-pubescent noise
that filled that half block of 11th between Spruce and Green,
especially Mr. Erisman who lived directly across the street from us.
He and Dad had a fight one day when I was young,
and because he was a Democrat they never spoke much.
Sometimes we would be in the middle of a game when he came home from work.
We stopped playing as he slowly pulled into his driveway
and made sure we weren’t standing on his lawn.
He walked with a limp and it took him awhile to go from
his car to the front door; we always felt relieved when he was gone.

Nick and John lived on Spruce and played with us, too.
They cussed sometimes and didn’t always play very fair.
John, the youngest, frequently stormed home
if the game wasn’t going his way and we would have to refigure teams.
Our backyards bordered each other, but Dad had
put up a chain-link fence several years before they moved in.
One day Nick and John’s mom said our fence was on their property,
and she wanted it moved. She forgot about the fence when her husband
killed himself in the tree fort on the land they owned outside town.
My parents grieved over him; I remember our pastor coming over
to talk to them about it and telling them it wasn’t their fault.
I don’t remember Nick and John being very upset about it.
A couple days after it happened they came over to play football with us;
we didn’t know why or how they could play at a time like this.

Then one day the neighborhood decided it needed to change.
My family moved to Colorado in July; I wasn’t quite fifteen.
We cried when we said goodbye to Kahlab and his family.
My brothers and I felt bad that he wouldn’t be able to play street football anymore.
Not a year later, Kahlab’s family moved to Watertown.
I don’t remember saying goodbye to Nick and John, though I’m sure we did.
Their family stayed in town, moving to a new subdivision by the high school.
My parents said their mom remarried, but I don’t know where Nick and John are now.
A few years after we left, the Corvises died happy and old;
sometime later Mr. Erisman died alone and not quite as happy as the Corvises.
The people who moved into our house cut down the crabapple tree
and parked their camper along the curb taking up a good chunk of the playing field.
There are no kids on that block anymore; the cicadas have no one left to cheer.
I’ve gone back to visit from time to time and I like to believe someone remembers
how these streets used to be ours and how summer afternoons
used to be put to such good use.